There’s a global recession on people! Well, except in the US, Canada, and the BRIC countries. They’re just experiencing moderate growth.

But in Europe, there’s a recession on everyone! The UK is showing weak growth but….oh forget it.

Whatever the situation, ‘austerity’ is the current buzz word and to be honest, prior to a few  years ago I wasn’t really aware of the concept, other than as an adjective for the sort of person I generally tried to avoid at parties.

For some this is an inevitable consequence of genuine hardship, for others (and maybe I’m being a little cynical here) the latest trend, dare I say. But either way I think it’s having a cooling effect and in terms of food it’s opened up new avenues. And this is a food website after all.

People are baking again, cheaper cuts of meat – the best cuts in my opinion – are popular once more and in this country I think concepts of provenance and ‘proper’ cooking are now desirable. May I also refer you to my previous rant on chips. Good.

So tonight, ladies and gentlemen it’s caviar, only it’s the far more austere lumpfish caviar. Retailing at the more sensible price of around £40/kilo, it’s less than half the price of salmon caviar, and some 100 times less than the dangerously scarce Beluga caviar (which I have sampled and I can confirm is delicious). Still pricy of course, but then a little goes a long way.

As you may have guessed by the title I made it to accompany a porcini mushroom risotto and because, I like the texture, some parmesan crisps. It all worked nicely with a little scoop of ricotta that I had in the fridge.

If each serving was more than a £1.50, I’d be surprised. I’m keeping the belt tightened over here….

Start by soaking the mushrooms in the hot stock for 30 mins prior to cooking. Once ready, remove them and squeeze some of the liquid out with a sieve. Set aside until later.

In a heavy pan, fry off the shallots, celery and garlic until soft. Stir in the rice and butter and coat well. Add the vermouth and stir well (some of the rice starch will start to come out – this is good). Heat the stock back up in a small pan and leave on a low heat to keep hot.

Using a ladle, add a little stock and stir well until it’s nearly gone, then add another. Keeping ladling and stirring until all the rice is cooked but retains a bit of a ‘bite’. Soggy risotto is bad risotto. Towards the end add the parmesan and mushrooms. Taste and season. There should be a creamy sauce in the risotto, it shouldn’t be dry. Add a little water and a bit more seasoning if it is. 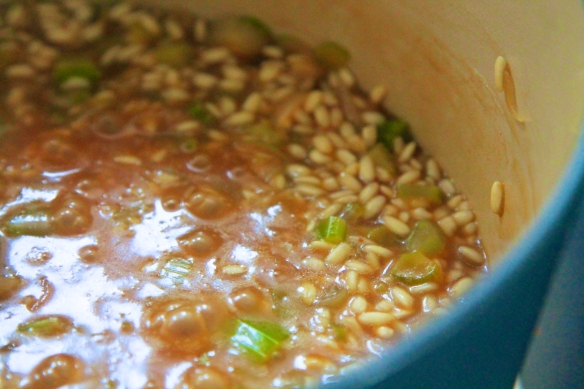 Meanwhile, make the parmesan crisps my forming mounds of grated grated parmesan with the oregano and black pepper. Grill until browned and flat. Remove from the heat and cool thoroughly. They should be nice and crisp.

Serve the risotto in bowls with the crisps, chopped chives. Spoon on a tbsp of ricotta and a heaped tsp lumpfish caviar per person. Dust with a little more cheese and black pepper. 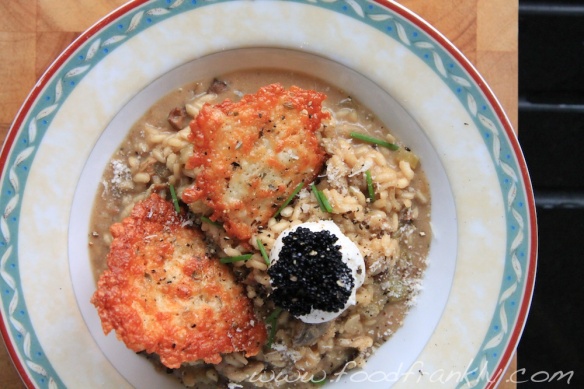