Hi everyone. I promise I’m trying hard to get in the festive spirit at the moment, but rather than winding down for Christmas, my day job seems to be winding up!

I was hoping to post some more festive recipes and findings this week, but I’ll leave that until next. In the meantime, I decided to make some distinctly cheery falafel.

A staple in the middle east, it’s quick, easy, filling, tasty and yet healthy, a bit of a Holy Grail then. It can be as mild or spicy as you like, I like it hot, Helen likes it mild, so I made it somewhere in the middle!

I managed to get some tahini paste in town the other week (a mixture of crushed sesame seed and oil) to make a simple tahini sauce recipe that I shamelessly ‘borrowed’ from BBC Goodfood’s website. It was the first time I tried and it and it’s delicious, a really nice background flavour that I think would work in a whole range of dinners. 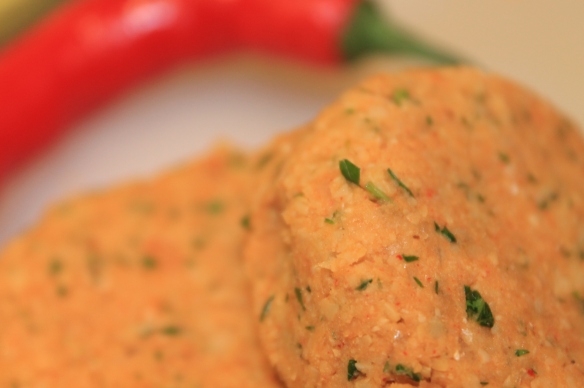 If using whole coriander and/or cumin seeds, dry roast them first in a frying pan and pound to a powder in a pestle and mortar. If using dried chickpeas, soak overnight and simmer beforehand for about 45 mins – 1 hour until cooked. Let them go cold.

To make the falafel, simply – chuck everything into a food processor and blitz until a smooth but thick (shapeable) paste.

Divide the mixture evenly, either lots of small falafels, or a few larger ones as you prefer. Roll then into balls and flatten slightly. Preferably then leave in the fridge for about 30 minutes to firm up, but I often just get them straight in the pan…

Heat a pan big enough to hold the falafel without being too big (or you’ll need too much oil) and fry on both sides until crispy and brown. About 5 minutes in total should do it.

In the meantime, you can make the sauce by mixing 5 tbsp of yoghurt with a heaped tsp of tahini, a good pinch of salt, chilli powder and juice of half a lime. Taste it and adjust it as you see fit.

That’s it! Simply serve it up on flat bread or pittas. We made our own bread (from 50g white/50g brown flour, 60 ml water, pich of salt, halved and rolled thinly and cooked on a hot cast iron pan), but for speed I often use shop-bought. 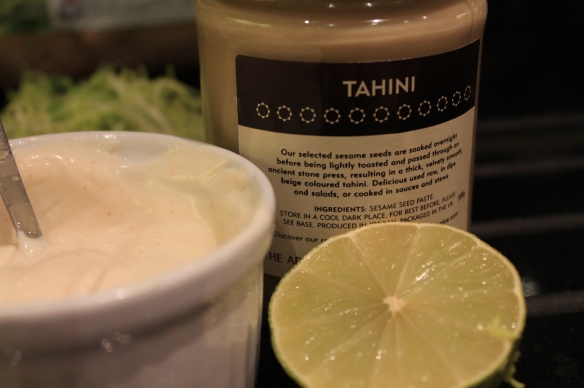