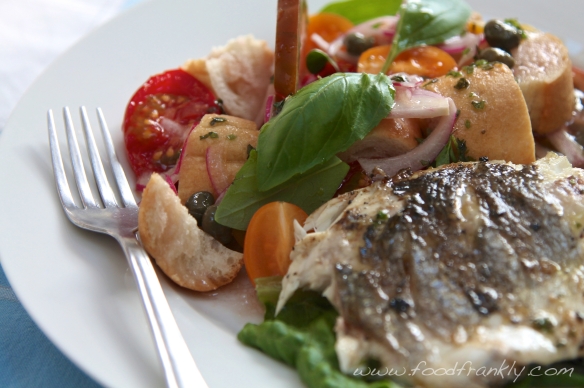 If you’re reading this I’d imagine you have a bit of an interest in cooking and good food, which can be both a blessing and a curse when going out to eat.

See, like most of you, it becomes quickly apparent when a dish arrives, how much effort went into the preparation and the ingredients involved. Once you’ve established this, it quickly  becomes even more apparent whether the price you’re paying is ‘fair’.

Last night we went out for dinner at a decent chain Italian restaurant in the City, mainly, seeing as the weather is so good, for the outdoor seating. I tend to avoid chains, as invariably I leave, at best, underwhelmed, or at worst slightly annoyed. Whilst most are very nicely decked out with exposed timbers, shabby-chic fixtures and theme driven posters, a majority of them with their advantageous locations have high ground rents and wage bills and, therefore, squeezed margins. So what gives? Inevitably it’s the food, be it in the quantity or, and more importantly, the quality.

Lat night I ordered the Cacciucco – a kind of Tuscan fish stew with Sardinian fregola. Perfect summer food I thought. But then when it arrived the squid (both pieces) were more akin to a fan belt. It also comprised a handful of fregola, two small slivers of fish, three very small clams, two mussels and a prawn. Yes, a single prawn. Two large pieces of bread were added, presumably to resemble anything like a meal and take up half the plate – completing the illusion.  All for a “bargain” £16.95.

If there were £2 worth of ingredients in the dish I’d be surprised, especially at wholesale prices. I was hardly expecting Bouillabaisse from the Southern coast of France but still…

Ah, well, weather was good and the Peroni was cold.

Across town there’s a great  family run restaurant called Panis. I’ve mentioned it before. It won’t win a Michelin star but it’s proper Sardinian food with half the decor and half the price.  The service is also great and no loyalty cards are being pushed. Sadly, no al-fresco dining, but lesson learned.

So being the bloody-minded type, I had to force the point home by making one of the most modest of salads – panzanella – and with it, some seabass fillets. The cost? £7 for both of us. £6 of it being the fish.

The key ingredient of panzanella of course it some stale bread, it’s a brilliant way to use up an old loaf if you’ve too many breadcrumbs already, or even if you don’t.

I used a mixture of tomatoes (oven drying some of them) for a bit of variety, some green leaves, and herbs from the garden. The dressing itself was also so simple, even forgoing the balsamic for the more austere red-wine vinegar. 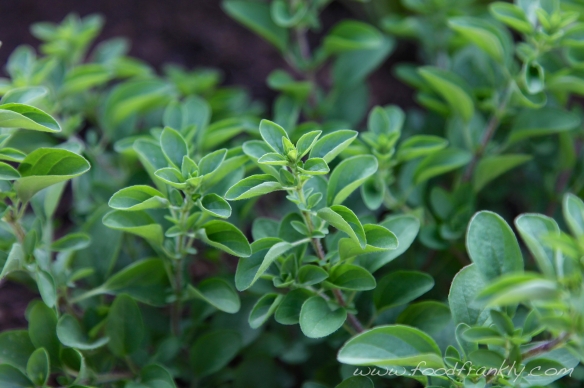 Marjoram doing nicely in the garden

Not sure what variety this is, I should have taken note. Anyone?

I cooked the seabass on the grill outside with woodchips for smoke and whilst delicious, mine did break. A schoolboy error for the presentation. Unfortunately the other one was being tucked into by Helen….

Make the dressing up then separate and add the finely sliced onions to mellow a bit while you do the rest.

I made oven dried tomatoes by halving 4 of them, sprinkling with a little salt and baking on a tray for about 15 minutes at 160°C/320°F. Remove and leave to cool.

Arrange the plate with the salad ingredients.

Arrange it on the plate with the rest and dress the salad with the, making sure the bread gets plenty of the vinaigrette.

Enjoy with a sense of smug satisfaction! 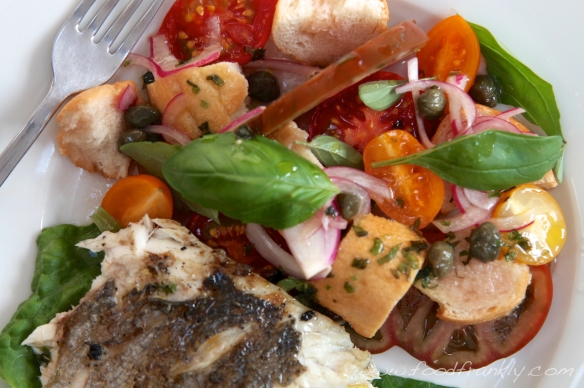