I’ve been very busy again of late and with that comes the inevitable late nights in the office. So whilst I can’t complain that business is good, it does tend to mean that dinner sways toward restaurants or (and please don’t judge me), grabbing something on the way home.

We try not to do the latter very often if I can help it and so anything I do make is on the quick and simple list.

These Portobello pizzas are great for this, in fact we both liked them so much I’ll be doing it more often. I cannot for the life of me remember where I got the idea, but it wasn’t mine, and so can’t give due credit, but thanks anyway whoever it was.

I ransacked the fridge for ingredients and found the end of some really good Raclette cheese, some spicy cooking Chorizo, and ageing green peppers. Now, that’s not a bad start I admit.

I made a couple of types here: a plain veggie friendly ‘Margherita’ (though very tenuously named) and a version with Chorizo and peppers. I did both as although I don’t eat a lot of pizza, I’m turning into a bit of a purist and tend to prefer pizza with few, if any, toppings other than tomato and cheese. I love Chorizo though.

Both were equally good. I added some breadcrumbs for a bit of crunch and I suppose this was bordering on “stuffed mushrooms” but I’m sticking to my guns on this one 😉 Oh, and no mozzarella, but still…..

Lay the prepared mushrooms on a baking tray and sprinkle with the herbs, a little salt, pepper and the garlic oil. Roast for about 5 minutes until wilting.

Add a slice of tomato to each (beefeater would be good) and add a little more salt. Cook for another ten minutes or so until the mushrooms are tender, the tomato is “oven-dried” and the flavour concentrates.

Whilst happening, and if using, cook the Chorizo and peppers in a small pan. No need for oil, the Chorizo has plenty in it. Drain on kitchen paper and set aside.

Take the mushrooms out the oven and top with the Chorizo/peppers if using and a pile of the cheese mixture. Bake or grill until the topping is melted and slightly browned.

Enjoy the carb-conscious alternative to pizza! 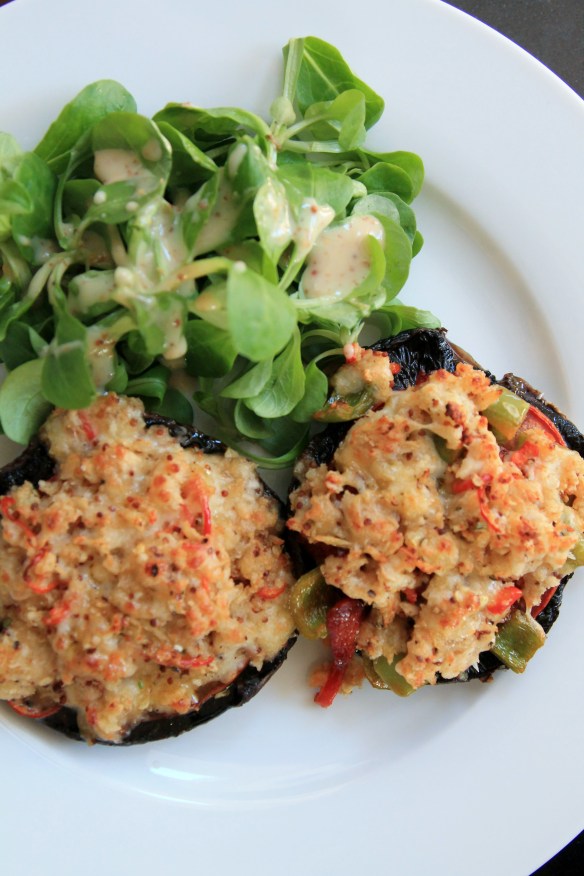