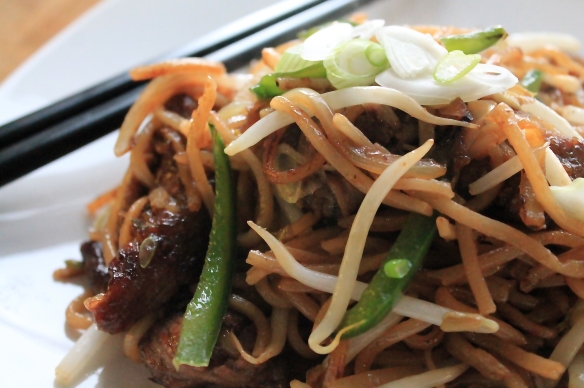 The thing about Chinese food is that, in the UK at least, it’s ubiquitous. Go to any small town or large village in the UK and there will be a Chinese takeaway, or restaurant. Or restaurant with takeout. You get the picture.

It’s popular then, but yet outside the swankier districts of the major cities, it’s fair to say the food never reaches the status of ‘gourmet’. I know a lot of you will have examples where I’m absolutely wrong, but I know of up-market restaurants doing French, Italian, Thai, Indian, Japanese and British food, but none doing Chinese.

The thing is that Chinese food uses some of the planet’s tastiest ingredients. Amazing dim sum, peking duck, char sui pork, stir fired noodles. Need I go on. So what gives?

It’s fair to say that most Chinese takeaways vary widly, but the same suspiciously vividly coloured sweet and sour sauces remain a constant and the ingredients are rarely, and I’m sticking my neck out here, high quality. It’s why I don’t really go to them.

And so, armed with my Ken Hom e-book, I’ve been setting out to try and make the Chinese food I know and love without the luminosity, MSG and hydrogenated fat.

First on my list, a simple Beef Chow Mein. I used some left over rare beef from a Sunday lunch (which I will be posting in a St. George’s Day special) but other than that the ingredients were cheap and beautifully quick to cook.

The beef is important here as cheap cuts will turn to rubber – this was from a well-aged piece of sirloin. But most recipes call for fillet. It seems sacrilege to use such a quality (and expensive) piece of meat this way, but at least you don’t need much! I dipped it in cornflour before cooking to get a nice crispness.

Prepare all the ingredients first, it’s essential otherwise you lose it halfway through. This was on the plate in 6 minutes tops once the wok is going, so you snooze – you lose in this case…

Prep all the ingredients. Cook the noodles as instructed until just done and not too soft. Rinse under a cold tap to cool and drain well.

Heat a wok with the oil until screaming hot and add the cornflour coated beef. Stand well back then get in there and stir! Add a splash of soy to colour the beef.

Add the onion and garlic and stir until coloured then the rest of the soy and rice wine/sherry. Evaporate off the liquid a bit then add green peppers, beansprouts and noodles. 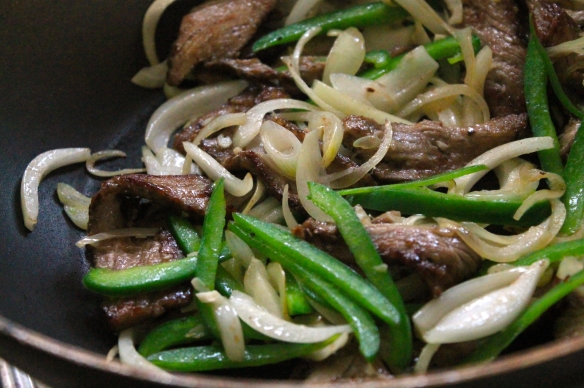 Stir fry for a couple of minutes on a high, high heat. Pour in the Oyster sauce, and sesame oil. Serve it up! Phew

Leave a Reply to Food and Forage Hebrides Cancel reply