There was a time long ago, when we had to go to the phone to use it, wireless meant ‘a radio’, Betamax was on the way out and Bluetooth would have presumably meant a trip to the dentist, when I used to eat “Crispy Pankcakes”.

I presume it was a UK thing, but they were basically folded and breaded pancakes that when cooked, by whatever means you choose, disguised a variety of fillings the temperature of molten magma. Now these weren’t haute cuisine by any stretch of the imagination, think savoury pop tarts, only hotter, but as a child I seemed to remember quite liking these things.

Today is Shrove Tuesday or Pancake Day of course, so this and the fact Findus (the original makers) has featured heavily in the news of late, lead me to the natural conclusion that I had to replicate these little pockets of lava.

I was late home tonight so I swung by the store on the way back and picked out ingredients for the filling I thought would be quickest to be frank. Spinach, ricotta, bacon and mushroom seemed to fit that profile and is invariably good. And so it was on…

These turned out a little bigger than I remember so I ended up making 4 and freezing two. If I could have gotten them, porcini mushrooms would have had much more flavour, but I couldn’t.

I had to make a sweet one too, I had my orders, and I went for chocolate sauce, banana and flaked almonds. This was a little easier!

For the sweet version:

To make the pancakes, simply mix the ingredients in a bowl, adding the liquids to the flour and whisking as you do to avoid lumps. Stir in a good pinch of salt

In a small pan, fry the pancakes in a little oil so as they are thin and about 23cm/9 inches across. Once done, leave to go cool, they will need to be.

To make the filling, blanch the spinach in a little water until wilted. Drain, cool and squeeze out as much water as you can.

Whilst cooling, fry the bacon in a little oil, the chilli flakes and garlic with the sliced mushrooms until any water released has dried up. Set aside to cool.

Chop the spinach and mix into the ricotta. Once the bacon/mushroom mixture is cooled, at that too. Taste and season if needed.

To make the pancakes, first beat an egg in a bowl decant half to a ramekin and mix with a tsp of flour to make a ‘glue’. Spoon about two tbsp of filling onto the middle of a pancake and brush the edge all the way round with the egg/flour glue. Fold it over carefully trying to expel any trapped air. 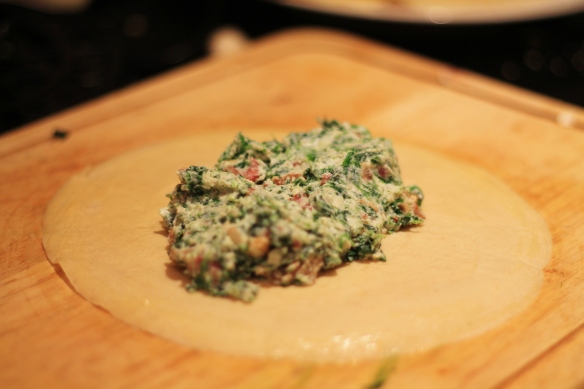 Brush it with the plain egg and coat well in the breadcrumbs all over.

Fry gently in a little oil on both sides and repeat with the others!

For the sweet pancakes, I simply heated the chocolate sauce with a mashed ripe banana. Spread on the warm pancake (I reheated it in a fresh pan but the microwave will so) and roll up, dust with coco powder and the flaked almonds.