After a pretty miserable day yesterday, I make no apologies for the classic Toad in the Hole.

There is something very underrated about British (particularly English) food but done well can be as good as any other country’s. Still on a health kick, I used low fat sausages. I know, wierdo. But with onion gravy, it’s still pretty good. In fact, everything is good with onion gravy.

Thankyou Delia for the mixture, but I tweaked it a bit to suit.

Cook the sausages (2 or 3 each). Heat the oven to 230°C (Gas 9). When at temperature place a smallish roasting tin in there with a Tbsp or two of oil so it gets very hot. You could cook the sausages in the roasting pan of course, instead of adding oil, but as mentioned above these were pretty fat free….sigh.

Whilst heating, mix the batter as per the ingredients above.

When hot and nearly smoking, carefully put the sausages in followed by the batter immediately after. Leave in the oven for 30 mins or until risen in the middle and well coloured.

Cover with onion gravy, add your veg of choice and tuck in. With mustard. 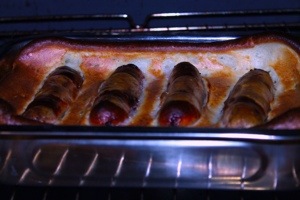